GOLDEN EL M: Belgium blast Estonia to stay in contention for F4, Portugal settle at No.1 in Pool C

Belgium remained in contention for the Final Four of the 2018 CEV Men’s Volleyball Golden European League. 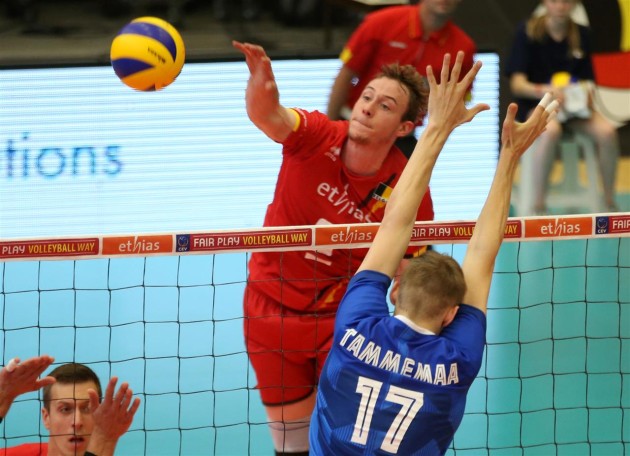 Belgium swept Pool A leaders Estonia at home in Kortrijk to stay in contention for the Final Four of the 2018 CEV Men’s Volleyball Golden European League, 3-0 (29-27, 25-29, 25-19). With this win, the „Red Dragons“ came to one point from Estonia before the last round. Of course, in order to hope for getting a berth in the Final Four in which three pool winners and hosts the Czech Republic will take part, Belgium need to beat Sweden and hope Slovakia stun Estonia. Belgium was deprived of help from Tomas Rousseaux who is recovering from injury. Igor Grobelny top-scored for the winning side with 14 points. There were no players in double digits in Estonia whose head coach Gheorghe Crețu replaced few starters in the third set, getting ready for a decisive game on June 6.

Slovenia scored their first win in the tournament but too late when it comes to vying for the Final Four. The 2017 FIVB World League Group 2 winners defeated Ukraine in five sets with 16 points from Žiga Štern and 4 kill blocks from Jan Kozamernik. Oleh Plotnytskyi notched 20 points for Ukraine while Yurii Semeniuk and Volodymyr Tevkun recorded 4 kill blocks apiece.

By tallying 21 points against Finland, Alexandre Ferreira increased his lead in the top scorer’s list but which is even more important, he brought Portugal to No.1 in the pool. His team beat Finland for the second time in the tournament and again by a 3-2 (25-22, 21-25, 25-21, 28-30, 15-10). Thus, Portugal will have the upper hand before the last round but still have to score a win against the Czech Republic in order not to depend on Spain vs. Finland result. Filip Cvetičanin made 76% attack (13/17) for the winners while João Fidalgo recorded 85% reception (26 digs, 1 error, 62% excellent). Samuli Kaislasalo top-scored for Finland with 22 points. Tommi Siirilä made 5 kill blocks and 4 aces (73% attack, 11/15, 1 error) while Lauri Kerminen had 94% reception (18 digs, 67% excellent).