Only two berths are vacant for the Final Four of the 2018 CEV Men’s Volleyball Golden European League. 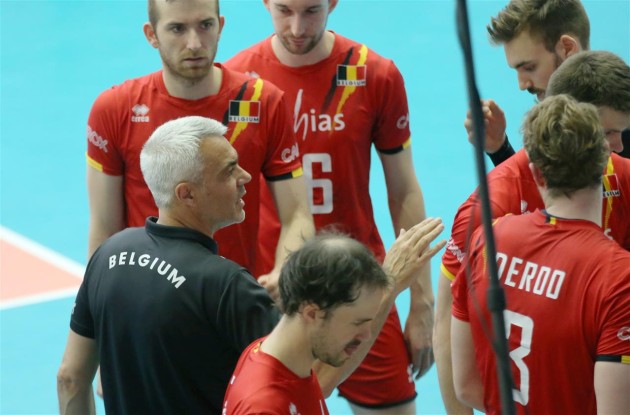 By sweeping Estonia, their direct rivals for No.1 in Pool A, in the penultimate round, Belgian players gave hope to their fans that they can claim a berth in the Final Four in Karlovy Vary (Czech Republic) in mid-June.

“We played well today. We still have some working points, especially in our serving. But perfect is practically impossible in volleyball. I didn’t get a special mission from coach Andrea Anastasi. I tried to be concentrated during the whole game, which was a problem in our previous match against Slovakia. But we still have some time to improve before the World Championship,” Igor Grobelny, the best scorer of Belgium in the match against Estonia, stated.

Despite losing to the „Red Dragons“, Estonian players still have everything in their hands before the last round as they collected one point more in the standings compared to their rivals (12-11) with both teams having a 4-1 record.

“Today, Belgium were better. They were more aggressive than in Estonia. The key of the match was the first set. We were leading at the beginning, but we couldn’t take the set at the end. We saved four set points and that was it. We didn’t use the good moments to our advantage. Our team was not so efficient in serving as it was in the home game. At the end we tried some changes in the team, preparing for our last game against Slovakia. Normally, we will win that game in front of our own audience. I see no reasons why we shouldn’t win if we play at our normal level. And I don’t think nerves will influence us,” Estonia captain Kert Toobal encouraged his teammates before a decisive encounter versus Slovakia on June 6, at home in Rakvere.

As for Belgium, they will play Sweden at home ground in Kortrijk.

The second remained berth for the Final Four will be grabbed by Pool C leaders. Portugal and Finland have, practically, equal chances to settle at No.1. Just like in Pool A, two main contenders faced each other in the penultimate round. Thanks to the best scorer of the 2018 Golden European League at the moment, Alexandre Ferreira, Portugal gained upper hand for the last round in which will play the Czech Republic who secured Final Four spot as the hosts.

„Although it has limitations in certain aspects, our team transcends itself and manages to overcome adversities. It was our third game won by the minimum margin, which shows that we are fighting to the end. We are in the lead and now the goal is to beat the Czech Republic and qualify for the Final Four,“ Portugal head coach Hugo Silva stated after the match against Finland.

In the last round, Finland will also face a team that no longer has ambitions – Spain.

“More than the result, we have to think about the next ball and continue to develop our game, specifically the block-defense, mainly when we face a team such as Portugal that received very well,“ Finland coach Tuomas Sammelvuo stressed shortcomings of his team.

In addition to the Czech Republic, Turkey have also booked their ticket to the Final Four.

GOLDEN EL W: Bulgaria and Azerbaijan will fight for the last spot on F4