WC 2019 W: China secure gold medal one round before end of tournament

China National Team has secured the title at the 2019 FIVB Women’s Volleyball World Cup in Japan one round before the end of the tournament. 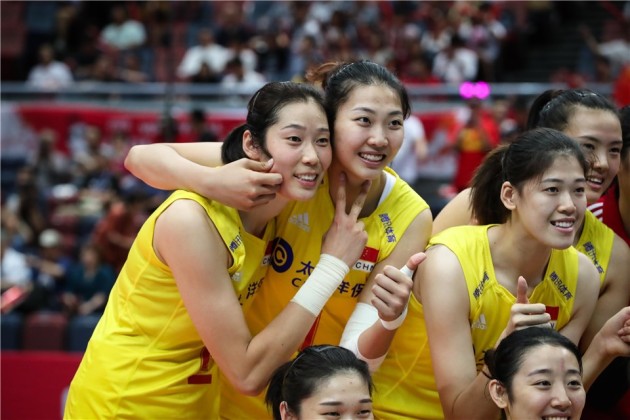 By beating world and European champions Serbia, who came to the tournament without five key players, on Day 10 in Osaka, China conquered the World Cup for the fifth time ever, the second in a row.

China came to the event in Japan with all of their main forces and did not suffer a single defeat in the tournament in previous 10 rounds. The team coached by Lang Ping secured the title one round before the end of the 12-team round-robin tournament as they made a four-point gap (and one win more) in the charts compared to the second-placed United States (29-25).

Outside competitions in Asia, China have clinched most of their titles at major world level tournaments exactly at the World Cup (5). Also, not counting continental events, the World Cup is the tournament in which they won their first-ever gold medal (1981).

South Korea stunned Brazil in Osaka (3-1), extinguishing rival’s medal hopes. In order to have a chance to win a medal, the “Seleção” needed a 3-0 or 3-1 win against the Asian side. But, Kim Yeon-Koung had something else on her mind, pouring in 25 points, including 5 kill aces. Lorenne Teixeira scored 23 points for Brazil.

The USA and Russia dominated against African rivals, Cameroon and Kenya, and kept positions in the standings which they occupied prior to Day 10 (USA second, Russia third). Both teams will have difficult tasks in the last round to keep these positions, (USA vs. Korea and Russia vs. Brazil) so re-order in the charts is something that definitely might occur. Good news for the USA and Russia is that their medals are not jeopardized.