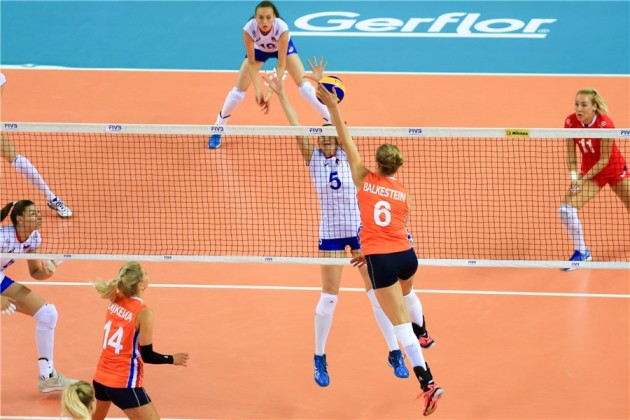 After demolishing Russia in front of rival’s fans in Kaliningrad, in Pool F1, The Netherlands settled at the top of Group 1 rankings, with 5-1, from where they will await the continuation of the Intercontinental Round, which will occur in only 4 days.

Russian NT head coach Vladimir Kuzyutkin will definitely have to work much harder with his ladies as they achieved only two wins in six matches of the Grand Prix, so far, and already endangered their spot at the Final Six.

Celeste Plak – Anne Buijs duo led Dutch NT with 16 and 15 points, respectively, while Irina Zaryazhko noted 11 as the only player with double digits in Russia.

Dominican Republic have a quite solid Grand Prix campaign at the moment, reaching 3-3 after a dramatic tie-break victory over Belgium, partially 25-13, 21-25, 25-21, 18-25, 15-11, nailing rivals to the bottom of the standings (0-6). This game also took place in Kaliningrad, Russia. Bethania De La Cruz and Brayelin Martínez scored 22 points each for the Caribbean side. Kaja Grobelna made 21 for the „Yellow Tigers“.

RUS M: Muserskiy about his absence from „Zbornaya“ – „I have no desire to play for Russia”

GP 2017: In Chinese squad even libero can score point (VIDEO)