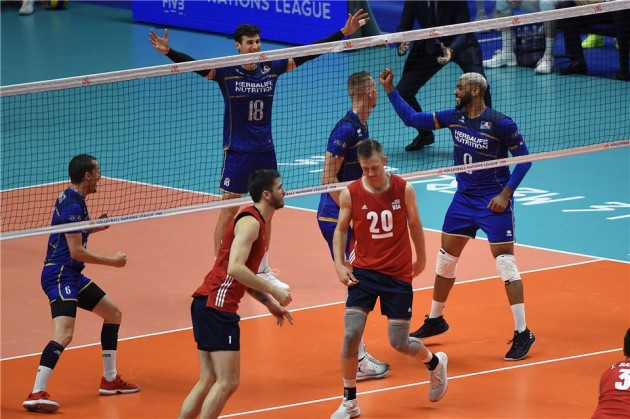 After an early effort from Earvin Ngapeth for which the USA did not have a solution, Stéphen Boyer was the one to push France in key moments. The entrance of Aaron Russell in the second set instead of Benjamin Patch did not pay off to John Speraw instantly but did in the next two sets which his team clinched to frighten the audience at the Stade Pierre-Mauroy. France’s attacking efficiency was outstanding in the first two sets – 71% and 76%, respectively!

When Matthew Anderson started to frequently find gaps in France’s block, the USA managed to give themselves a hope to turn the course of the game around. The American fighting spirit helped them raise from the dead in the fourth set as they were five points down – 19-14. Speraw’s wards saved two match points and converted their first set point after a huge rally that was closed with Taylor Sander’s smart kill.

It was nearly a déjà vu for „Les Bleus“ as they got a 5-1 but allowed their rivals to level things up at 7-7. Boyer sealed the deal for the side coached by Laurent Tillie to help his team beat the United States for the fourth time in the last five games.

The USA committed too many unforced errors compared to France (32-17) for which Boyer poured in 31 points (3 kill blocks and 3 aces), while Kévin Le Roux recorded 4 kill blocks. Anderson chipped in 23 points for the United States.