Russia demolished lethargic Brazil in a one-sided duel between current European and Olympic champions in the semifinal of the 2018 FIVB Men’s Volleyball Nations League in Lille, France. 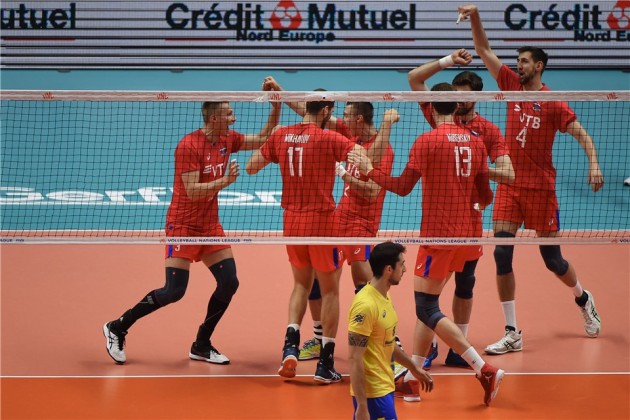 Russia imposed a ruthless dominance in the semifinal of the Nations League at Stade Pierre-Mauroy, the battlefield of the Final Six, to down Brazil in straight sets, partially 25-17, 25-18, 25-14, and progress to the grand finale.

In each of the three sets, „Zbornaya“ had a significant lead at the second TTO, sometimes even at the first TTO, while the third set was a one-way street for the reigning CEV European Championship titleholders more than the other two as it ended with an 11-point advantage!

The 2016 Rio Olympics champions had no players in double digits which happens to them… well, almost never! Maksim Mikhailov top-scored for Russia, who prevailed in served aces by a 10-2, with 12 points.

Brazil had a chance to tie head-to-head against „Zbornaya“ as it was 33-32 prior to this game for the European side. They will have to wait for some other chance to do so. Maybe in the two months when the 2018 FIVB World Championship sets off…

VNL F6 M: Tillie – „Among all our qualities, the one that made us win tonight is mental“