France was one of the last teams to qualify for the 2013 CEV Volleyball European Championship Women that are set to start this coming Friday in Switzerland and Germany. They eventually did so via a golden set whereby they fought their way back after losing their first third-round fixture to Ukraine. With only a few days left for their debut in Zurich, the players mentored by head coach Fabrice Vial feel ready to take on that challenge. 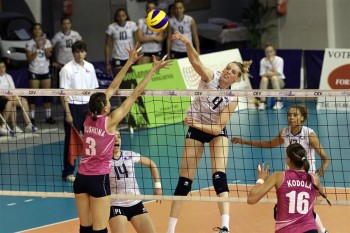 This past week France played four friendly matches with Croatia in Maribor, Slovenia before returning home to spend the last few days before departing to Zurich in Sélestat.

France claimed their last friendly with Croatia in straight sets and that series of matches was a very good chance to see where the group stands before they take on Belgium, Italy and Switzerland in prelim Pool B. The first out of these four games ended in a 2:2 as it was stopped after four sets before Croatia won the second fixture by 3:1. After losing their third clash 0:4, the “Bleues” cruised to a straight win to round out their camp in Maribor.

“It was a very fruitful week for our group where we could finalize our preparations for the upcoming EuroVolley in the best way. It was a very good experience for my players to play a strong team like Croatia that is about to depart for the European Championship with the ambition to go for a very good result. As we won the last game with Croatia, we definitely got the right confidence for the last stage of our preparations. I have seen that my players performed well individually as well as collectively” head coach Fabrice Vial says. “They have showed that they can cope with difficult situations and this is the best we take from this experience”.