After the 0:3 defeat in the first leg of the final, PARIS Volley really looks doomed against opponent Guberniya NIZHNIY NOVGOROD before entertaining the Russians at home for the decisive second leg on Saturday, which will determine the winner of the 2014 CEV Volleyball Cup - Men. Indeed, the French side is facing the difficult task to win the match by 3:0 or 3:1, and then the Golden Set, in order to claim another European trophy after the Cup Winners’ Cup in 2000, the European Champions League and the European Super Cup in 2001. 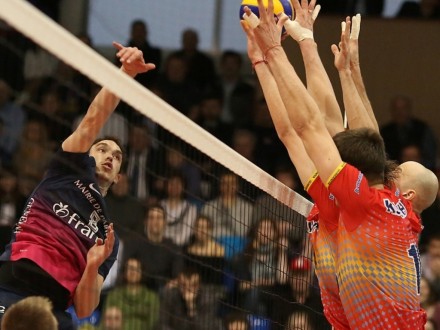 To achieve this, something the Parisians can rely on is the ambiance at Charlety whose capacity was increased and should be crowded for the occasion. The Paris Dolls cheerleaders will make a special appearance on Saturday between the sets to give the night an even more festive atmosphere.

To make the exploit, PARIS’s players will have to perform well on their strengths, especially in the serve-block phase of play, and hope to find a Marko Ivović at his best (he was the author of only 9 points in Russia).

The Serbian-born player will be an MVP contender if he makes the same performance he did earlier during this season.

The team from Nizhniy Novgorod is obviously in a strong position to win its first continental cup in its first participation in European club competitions. Two sets won would be enough to win the trophy.  To achieve this, the Russians will seek to reproduce the quality of blocking they showed on Wednesday, which greatly embarrassed the Parisian attackers.

The decisive game on Saturday, March 29, is scheduled for 20:00 local time at the Salle Charpy – Stade Charlety in Paris.