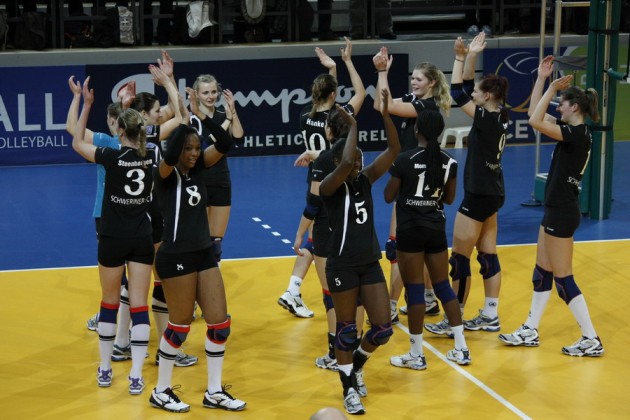 The guests from Italy immediately asserted their intention to impose their supremacy by scoring with great consistency and efficiency already in the early phases of the opening set. They kept full control of the operations all the way through even though the Dutch mentor of SCHWERINER SC, Teun Buijs, stopped the game a couple of times to find a way to stand that Italian storm (25-11).

However, the hosts finally found their best play in the second set and supported by their many fans, they stepped up the quality of their game and could eventually wrap it up at 25-22 for the 1:1.

That good performance eventually pushed the home heroines to deliver another good show in set 3 where they gradually piled up a margin of 4 points and even though BUSTO ARSIZIO got pretty close to draw level, still SCHWERINER SC could assert its rule and go for the provisional 2:1 (25-17).

Probably feeling the pressure resulting from the opportunity to finish the game in four sets, the home players could not repeat that performance in set 4 where BUSTO ARSIZIO displayed great quality, especially from the serving line and in offense, to pressure the local side. After what was a real show of strength by the guests, Unendo Yamamay could call for the tie-break by pocketing the fourth set with the terrific score of 25-13.

Things changed once more in the decisive set where SCHWERINER SC got back on track being able to stand the quality of their opponents, displaying some world-class Volleyball to delight an almost packed arena. After being the real revelation of the prelims, the Germans cruised to a 3:2 victory (15-13) and may even make it to the Playoffs 6 if they claim also the return game that is scheduled for next week in Italy.

ARG M: Martin Ramos – We have to work in every set