TV Rottenburg qualified for the playoffs after a hard won battle against Netzhoppers 3:2. Hans Peter Muller-Angstenberger commented the game. Felix Isaak missed the game because he was selected as a bone marrow donor. 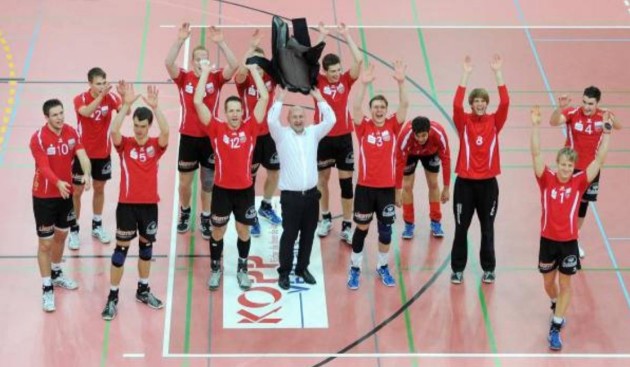 “I’m overjoyed. This is incredible for the team and our fans as well” TVR coach Hans Peter Müller-Angstenberger said immediately after the last ball.

It was a tense first set played point for point, but the hosts managed to finish it in their favour 26:24.

In the second set it was a tough battle just like in the third, Netzhoppers eventually took their first set ball to win 23:25.

The third set brought a great game from the guests and even the brave cheering fans were unable to prevent the 17:25.

Rottenburg came back in the fourth, on the second tehnical time out it was 16:11, and after that the guests just managed to narrow the gap to 25:23.

In the decisive fifth set, the hosts started better and maintained their lead through the whole set. It was 8:5 then 13:8. They finished 15:11.

Felix Isaak missed the game because he was selected as a bone marrow donor.

“When it comes to a human life, volleyball is only a minor issue” says TVR manager Jörg Papenheim.

BRA M: Canoas reaches for semis in front of their crowd