Italian libero Martina Boscoscuro passes from Sala Consilina to the German side Wiesbaden. 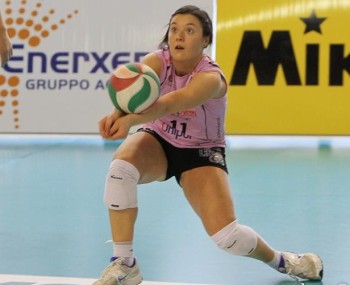 Boscoscuro’s (September 2, 1988) career went gradualy. She had started in the Serie D and after four years she got two promotions in the the B1.

Her first season as a professional was 2005/06 when she had signed to Esperia Cremona Pallavolo in Serie A2. In the following season she made her debut in Serie A1 wearing the t-shirt of Volley Club Padova.

In the 2009-10 season was hired by the Italian champions of Robursport Volley Pesaro, as the replacement for Elke Wijnhoven, and was often used to improve reception. Boscoscuro won an Italian Super Cup and the Scudetto.

In the 2010-11 season she went back again in Serie A2 playing for Volley 2002 Forlì. in mid-yea she wass sold to Dauphines Charleroi, in the Belgian league.

In the 2011-12 season he returned to Italy, in the Polisportiva Antares Sala Consilina.