Germany: Trip to Tatarstan turns into kind of adventure for DRESDNER SC

The return match with Dinamo KAZAN for the 1/8 finals of the 2012 CEV Volleyball Champions League has turned into a real adventure for the players of DRESDNER SC and not simply because they got the chance to play again the star-studded team around Ekaterina Gamova. 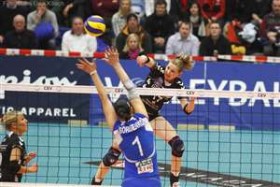 Trip to Tatarstan turns into kind of adventure for DRESDNER SC

The trip to the capital city of Tatarstan was not that easy to organize for the club and the team took off at 5.30 am on Tuesday to make it to Kazan after two stops in Berlin and Moscow.

Finally, as they make it there, the players will have traveled for some 12 hours, 2’700 km and across three time zones. On Thursday DRESDNER SC will play Dinamo KAZAN in what is likely to turn the last game this year for the German rookies in Europe’s top league. Although they still can reverse the result of the home game where they lost in straight sets, still this looks like a kind of miracle.

DRESDNER SC is on full swing in the national league having scored this past weekend its seventeenth consecutive win after edging Bayer 04 LEVERKUSEN in straight sets (25-23, 25-23, 25-17). For this game head coach Alexander Waibl decided to rest some of his starting players, with libero Lisa Stock – 17 years of age – debuting in the national league to replace on that position Kerstin Tzscherlich and being chosen as MVP at the end of the game.

After their game in Kazan, the players will fly back to Germany via Moscow directly to Hamburg to wind up a busy week with the next round of the national league against TV Aurubis.

Argentina: Ciudad succeeded in end of the regular season and gets ready for what will follow