VfB FRIEDRICHSHAFEN scored this past weekend a very important victory in Germany’s Bundesliga: the team around head coach Stelian Moculescu defeated the third-ranked BERLIN Recycling Volleys in an epic match in front of 6’345 spectators 3:2 (25-23, 21-25, 23-25, 25-23, 15-12) to back up its second place in the charts currently topped by Generali UNTERHACHING. 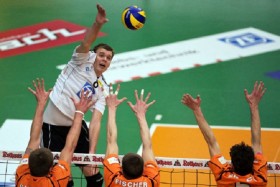 Successful debut celebrated also Brazilian spiker Leonardo dos Santos who recently moved from Romania’s Remat ZALAU to the Lake of Constance. The Brazilian replaced opposite Oliver Venno, who got injured in the second set while lading not properly after attacking. “His injury is a huge blow of fate”, said Moculescu. “Playing without opposite is not easy in modern Volleyball. Winning in spite of it shows that we are in a good shape”. In this difficult situation dos Santos brought all his experience on the court. Instead of nervousness he contributed coolness and self-confidence to bring his new team back on track. “I did not feel any pressure. I wanted to support the team as good as possible”, said dos Santos. “Now I am really, really happy. I have joined a big team, was allowed to play my first match and won. That is amazing”.
Dos Santos received loud compliments also from his teammate and compatriot Idi, who was honored as FRIEDRICHSHAFEN most valuable player of the match. “It was a great debut for Leo”, he said. “He joined the game right after the injury of Oliver and he had to solve a big problem. A victory like that demonstrated that our team is getting stronger and stronger”.