Volleyball is one of the sports with the longest tradition in Israel and a special gala – to be televised by Channel 5 and with thousands of people in attendance – will be taking place this coming March 19 at the harbor of Tel Aviv to celebrate its 80th anniversary. 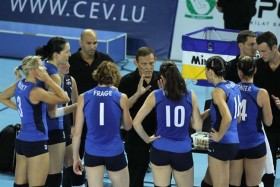 Volleyball was introduced in Israel back in the early ‘30s and it was initially practiced by amateurs in villages as well as in the universally known kibbutz. Afterwards the sport spread also across urban areas and the players gradually turned into professional sportspeople. Currently some 5’000 players are listed and licensed by the Israeli Volleyball Association for a total of 450 teams, with all communities (Jewish, Arabic, Druze and others) being represented in the sport.
In the last decade some companies and businessmen started investing money in the sport so that Israeli clubs have been able to sign also top foreign players. They surely helped develop the local players as well as the national teams. The club of Maccabi TEL AVIV recently advanced, this being a real milestone in Israeli history, to the 1/4 finals of the 2012 CEV Volleyball Challenge Cup while the women’s national team was back in the final round of the European Championship after a very long break, with their goal being now to make it to the 2016 Olympics in Rio de Janeiro. Some 9 years ago a Beach Volleyball league was also created in Israel and the discipline has gained much popularity, with Tel Aviv having hosted last year’s U20 European Championship.
The Israeli Volleyball Association is looking forward to a bright future, with 8 players coming out of the Volleyball Academy created at the Wingate Institute in Netanya having recently joined the national league and a youth division being again operational. With some former Volleyball players having turned into coaches all necessary conditions have been laid down for a splendid future of Volleyball also for the decades to come.

INTERVIEW: Igor Kolakovic for WoV – “I...