After Dinamo MOSCOW suffered a home defeat in straight sets to MC-Carnaghi VILLA CORTESE this past Thursday in the 1/8 finals of the 2012 CEV Volleyball Champions League, their head coach Boris Kolchin was immediately fired with his function being assigned to the current mentor of the Russian national team, Sergey Ovchinnikov. 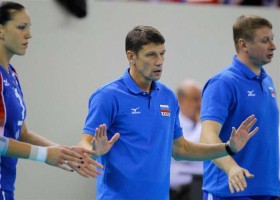 “I have accepted the proposal of Dinamo without any hesitation as this club has always set the highest goals. I will do my best to help the team fulfill such plans” says the 43-year old coach. Ovchinnikov had started the season at the helm of Dinamo KRASNODAR, a team that is currently participating in the 2012 CEV Volleyball Cup, but was dismissed this past January 16. This past October he had been appointed, only ad interim, to mentor the national team for the Olympic pre-qualifier that took place in Kaliningrad and after claiming the first place there, he was eventually confirmed for the last stage of the Olympic qualification that is slated for this early May in Ankara, Turkey.