The first edition of the South Aegean International Tournament held this past week in Syros came to a close with TV Ingersoll BÜHL of Germany winning the trophy as hosts Foinikas SYROS settled for second place. The tournament shall become a regular fixture for Volleyball in Greece as well as for the local sports family from the island of Syros. 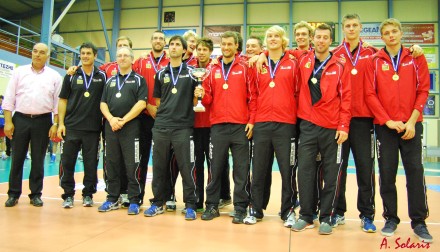 Photos and videos of the tournament were circulated in Germany, Bulgaria and Egypt, thereby helping with the promotion of this beautiful corner of the Aegean Sea. To express their gratitude for the warm hospitality they enjoyed this past weekend, the officials of TV Ingersoll invited Foinikas SYROS and its chairman George Vlachogiannis to Germany for some friendly matches that shall take place this coming December in Baden-Baden. A similar proposal was dropped also by the people of CVC GABROVO, the team from Bulgaria that also starred in the first edition of the tournament held at “D. Vikelas” sports hall with many inhabitants of Syros in attendance. Once the situation in Egypt improves, Foinikas will be invited to travel also to Alexandria to visit the club of Smouha, the fourth team that starred in Syros this past weekend.

“Against all odds we are very happy for we have been able to stage the inaugural edition of this tournament in the Aegean area” said the Chairman of the Department of Culture and Sports of the South Aegean region, Dimitris Gryparis after awarding the winning team from Germany. “Our intention is to turn this tournament into an annual event that will be touring across the Aegean islands. Though I come from water polo I am very close to Volleyball as well and to any sports activity taking place in this neighbourhood. This is only the start of a project whereby we want to promote culture and sport on our beautiful islands. The most important thing is that the stadium was crowded for the three days of the tournament and that the winners from Germany got a loud applause during the awards ceremony, something that shows the true passion of all people from Syros for Volleyball and sport in general”.

For more information about this country click on Germany.

WCHU23 W: USA get set for U23 World Championship in Mexico

Germany: Kupfer-girls without a chance against Ladies...