The players of DRESDNER SC have travelled for more than 10,000 km to make it to Omsk and play there on Thursday Omichka OMSK REGION in the second preliminary round of the 2014 CEV DenizBank Volleyball Champions League – Women. 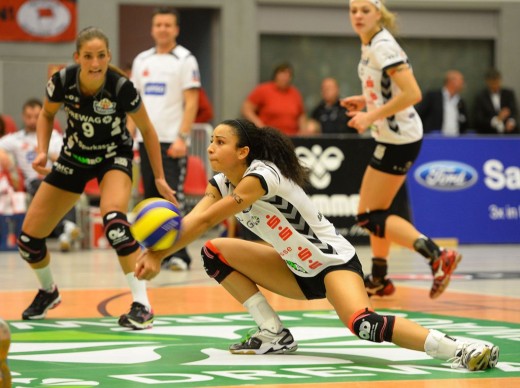 To make it to Omsk DRESDNER SC had to take on one of the longest journeys since they debuted in the European Cups years ago. They first went to Berlin/Schönefeld to catch a flight to Moscow and from there they boarded another plane to Omsk to make it there on Wednesday morning at 8 am local time.

Three years ago DRESDNER SC had already travelled to the Russian Far East to play Samorodok KHABAROVSK, a team from the city which is located nearby the Chinese border and not that far from Japan. It took almost 20,000 km to make it there and even though this time the players and coaching staff did not have to cross the whole Siberia, still their journey was similar to the experience the team had in 2010.

“We have been to Khabarovsk, Krasnodar and Kazan: all these matches were quite special for us on and off the court” recalls head coach Alexander Waibl. “To travel such long distances is always a challenge but also we shall not forget that at the end of your trip you always get to play one of the strongest teams in Russia. Omichka OMSK REGION and Rabita BAKU are the strongest teams in our Pool but we want to play our best so as to keep a chance to make the Playoffs 12” Waibl continues.

The management even had some troubles to organize the trip but they were eventually helped by the personnel of the Russian Consulate from the city of Leipzig.

“We have been to Russia three times now; we know their staff there quite well and we are happy with their support. This makes the whole process a little easier” says Sandra Zimmermann. She also received additional help by the team manager of the Russian national team that she got to know during the prelims of the 2013 EuroVolley in Dresden.

“It is good to know that the members of our Volleyball family are helping each other. His advice really helped us organize our trip to Omsk and it also eased up our interaction with the management of Omichka” she concludes.

DRESDNER SC is looking forward to the game with Omichka though the players have a very short time to adjust to a time difference of six hours. The team captained by Stefanie Karg would like to repeat what they did last week as they downed BEZIERS Volley in straight sets at home.