GER M: Berlin coach Mark Lebedew – “It’s down to us”

Qualified for the semifinals of the national cup, with two bitter losses in the national league and two wins out of three away matches in the 2014 CEV DenizBank Volleyball Champions League, the team of BERLIN Recycling Volleys has experienced a season with ups and downs so far. In this interview head coach Mark Lebedew talks about the team’s performances and his expectations. 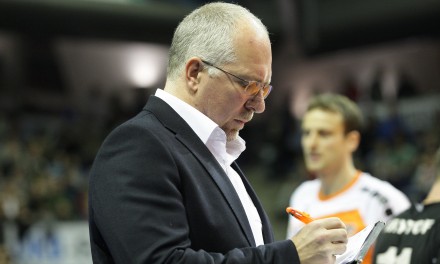 Mark, after successfully completing the quarterfinal of the national cup “DVV-Pokal” against the league’s rookie VSG COBURG/Grub this Wednesday (25-21, 25-12, and 25-17) your team was assigned to play Generali UNTERHACHING in the DOL for the semis. What do you expect from this semifinal clash?

We’ve played UNTERHACHING three times in the cup within the last three years – and we lost each match and were eliminated from the competition. Each time we faced them in an away match, twice in the quarterfinal and once in the round of the last 16. Now we’re playing at our home court. Together with our fans we want to do it better.

In three difficult away matches in the prelims of the 2014 CEV DenizBank Volleyball Champions League, you scored six points – and the last three matches will all be played at the Max-Schmeling-Halle in Berlin. What do you conclude from the first half of the league round and what do you expect from the second half?

Honestly, we had not expected to score six points out of the first three matches. Last year we could only take two points out of three away games. Thus, we’re now in a good position for the three last matches. It’s down to us to make it to the Playoffs of the best twelve European teams.

Coming back to the national campaign, the league season has been not as successful as last year. You’ve started with a strong 3-1 victory against UNTERHACHING, but lost against the rivals from evivo DÜREN (1-3) and VfB FRIEDRICHSHAFEN (0-3) and are currently ranked fifth. Which reasons do you see for the two defeats?

The season’s opener against UNTERHACHING was obviously the best match we’ve played in the Bundesliga so far. In Düren coming right away from the clash with TRENTINO and in Friedrichshafen after the match against LUGANO we might have paid for our efforts in the Champions League. The Bundesliga seems to be more balanced this year, but it’s still a long way to go in this campaign and we still have time to fight for a top position in the standings.

To check the stats and read more about this competition click on German National Championship 2013/2014 coverage page.