The day before the start of the World Champs qualifier taking place this weekend at the MHP-Arena in Ludwigsburg, the coaches and players of Germany, Croatia, Estonia, and Turkey shared their feelings and expectations. 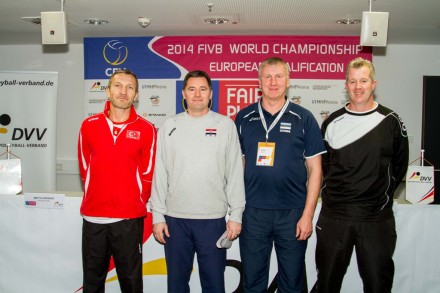 “There is a very good ambiance in our team. We had a good preparation and played ten tough sets in our friendly matches with Belgium” says Germany’s opposite and superstar Georg Grozer. “Of course we know that not everything works perfectly yet, but things have gone better and better. We have a young team with great potential and our goal is to make it to the World Championship.”

“Every game will be difficult” adds wing-spiker Christian Fromm. “Our advantage will be the home crowd that will push us to deliver our best performance against all opponents. Everyone can look forward to some nice matches throughout the weekend here in Ludwigsburg.”

“We expect to play a good tournament and will try to make it to the World Championship” says Turkey’s assistant coach Taner Atik. “Of course it is important to take it step by step until the final game with Germany on Sunday. We respect all teams but we are not afraid of anyone.”

Croatia’s head coach Igor Šimunčić: “I think this is going to be a very tough tournament. There are four good teams fighting for one ticket to the World Championship. We know that Germany is the pre-favorite because they are among the top five in Europe and they play at home. Our advantage is that we can play with no pressure while they have a lot on their shoulders as the expectations here are really high. Maybe this is our chance to cause a sensation.”

“It is a real challenge for us” Estonia mentor Avo Keel adds. “Germany is the best team here but we will be trying our best so as to finish at least second in the Pool. I hope this will be enough to make it to the World Championship Final Round.”

Germany and Croatia will open the program on Friday afternoon before Estonia and Turkey go for the second clash of the day.