Georg Grozer: Man with the hammer

When Georg Grozer puts his hand to a ball, a murmur spreads through the volleyball halls of the world. His brutal serves are as feared as his thundering offensive shots. 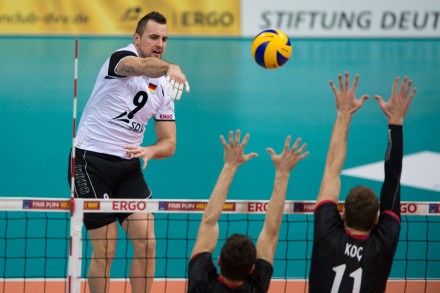 This season he won the Super Cup and the National Cup in Russia, and was crowned the top club team in Europe with Belgorod. “It feels incredible and intense after such a success. It’s something you dream about for years and work hard for, and then when you win it you can’t believe it,” said Grozer.

However, he isn’t planning on allowing this run of success to come to an end any time soon – after all, the FIVB Men’s Club World Championship is about to get underway. “I know I’ve already won a lot, but winning is fun. That is why I’m going to give it my all so that I keep on winning medals! My goals are the championship and the Club World Championship, which I haven’t won yet. My aim is to play a perfect season.” This of course includes the absolute highlight, the FIVB Volleyball Men’s World Championship Poland 2014, where he has his sights set on making another dream come true with the German national team.

At the 2012 Olympic Games in London, where his incredible 39 points contributed to the 3-2 victory against Serbia in the preliminary round match, Germany was eliminated in the quarterfinals by Bulgaria, just as they were in the 2013 European Championships. Now it’s time to win a medal – both Grozer and national coach Vital Heynen are convinced that it is possible to achieve this goal. “I believe that if we are all fit and healthy, both physically and mentally, then we will be able to go far in Poland. But we will have to work hard over the summer and believe in it as a team,” said Grozer. “It’s one of my dreams and goals to win a medal for Germany. I don’t have much time left to achieve this, but it could happen with this team. I’m sure of it!”