The FIVB Men’s World Olympic Qualification Tournament in Germany is set to begin on Friday at Max- Schmeling hall in Berlin, Germany with coaches optimistic about their team’s chances to claim the last ticket available for the 2012 London Olympic Games. 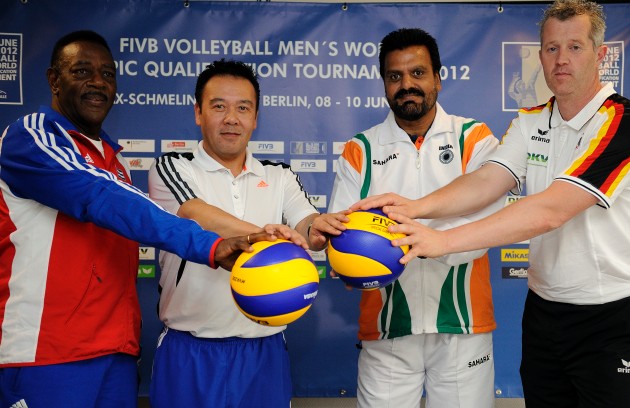 The event features four National volleyball teams competing for one berth at the 2012 London Olympic games where they will play a round robin tournament with the winner earning the ticket to London.

Teams of Cuba, Czech Republic and India are joining host Germany for the 3 day tournament with their coaches eager to achieve the dream of Olympic Qualification as all the teams are planning to play at Earls Court in London next July

Orlando Samuel (Cuba): “We are here to qualify for the Olympic Games. It’s the last chance for all of us. All four teams have the skills to qualify to London. We are ready and well prepared, although we have had some changes in our team and also the young age of most of them.”

Stewart Bernard (Czech Republic): “We are preparing since one and a half months, we played in the European League and made international matches against France. We changed the team after the Pre-Olympic-Qualification in November in France. It’s a big chance for every team and everyone wants to use it. There are favourites in this tournament; these are the teams with the better experience.”

Vital Heynen (Germany): “Everyone in Germany thinks we will qualify for the Olympics. But it will be very difficult. Cuba and the Czech Republic have strong teams and India is technically very strong. It will be a hard tournament, but my team can do it and I believe in our chances. I asked my players to play well before thinking to win and I think if we played well the victories will come automatically.”

G.E. Sridharan (India): “We are training since two months and had some friendly matches against China and Kazakhstan. We participate for the first time at the Olympic qualification and encounter three top teams in Berlin. I hope my players express themselves. Everything is possible in volleyball, also our qualification for the Olympics.”