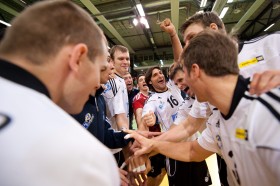 The winners of the past three editions, Generali UNTERHACHING, will be the opponent of VfB FRIEDRICHSHAFEN as the last act of the competition takes place at “Gerry-Weber-Stadion” in Halle/Westfalen in front of some 10’000 spectators.

The group mentored by Stelian Moculescu had some problems only in the opening set of the match with MOERSER SC, a team which is currently ranked sixth in the Bundesliga. The guys from the Bodensee were trailing 18:22 before opposite Oliver Venno turned the score around with his terrific serves.

“We needed some time, until the last section of the first set, before we could find our rhythm” says Moculescu.

“We significantly improved the quality of our play in the next two sets and played much more concentrated” he adds.

VfB FRIEDRICHSHAFEN dominated the scene in the second and third set, especially with Oliver Venno (13 points) and Canadian outside hitter Thomas Jarmoc (15).

“Thomas played an outstanding match and today he was the best from our side” stresses the head coach. Jarmoc was also pleased with his performance but especially with such a clear win.

“It was great that I could support my team that way and this victory is very important” says the wing spiker.  VfB FRIEDRICHSHAFEN qualifies for the last act of the national cup for the twelfth time in history, having already taken the trophy ten times, a real record in German Volleyball. The final – which has gradually turned into the real Volleyball event of the year in Germany – will be a remake from last year’s game with Generali.

“I have heard that it is crazy there, with many spectators very close to the court” adds Jarmoc. “We play UNTERHACHING for the third time this season. I am sure it will be an amazing match in a great atmosphere”.