ECJ M: Germany beat Greece 3:2 to claim their first win in the tournament

In the last match of the day in Randers, Germany needed a win to keep their hopes of a spot in the Playoffs alive. Their opponent on the other side of the net was Greece that was the direct competitor for that spot in the next round being ranked fourth in the group. The second tie-break of the day was needed before Germany could cash the final 3-2 (25-20, 19-25, 20-25, 25-17, and 15-11) and their first win in the tournament. 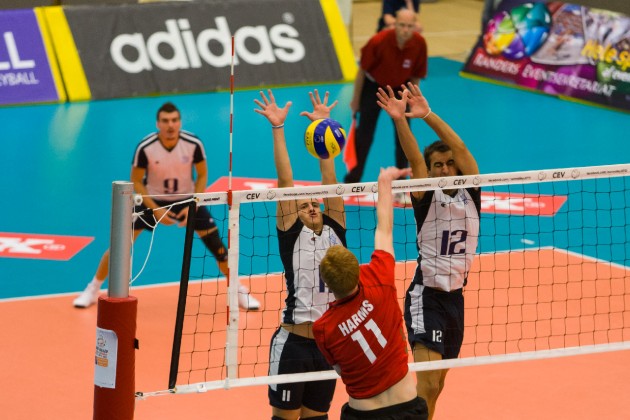 In the first set Greece was in front 8:7 at the first technical time-out. Then Germany made four points in a row, got the upper hand and led 16:14 by the second. The Greek team fought hard and the set was still close at 20:22 to Germany before the Germans closed it 25-20.
The second set was close too. Greece was in front 8:6 at the first technical time-out and 16:13 at the second. Germany was not sharp enough when they had the chance to move ahead while Greece on the other hand seemed determined to level the match and won the set 25-19.
The tense match was tight again in the third set where Germany led 8:7 at the first technical time-out, but a sublime Greek block leveled the set at 12:12 and Greece was in front 16:15 by the second technical time-out. A serve by wing-spiker Menelaos Kokkinakis closed the set 25-20 to Greece.
Germany found back their best play in the beginning of the fourth set and was in front 8:4 at the first technical time-out and 16:9 by the second. Their serve was a lot stronger than in the previous sets and they deservedly won the set as clear as 25-17.
In the tie-break the Germans seemed to have the mental upper hand after their fourth set win. They quickly got a little gap down to Greece and led 8:5 when the teams changed sides. Germany came at 10:5, but the Greeks found some hidden reserves, made four points in a row and reduced the German lead to 9:10. Four match points followed for Germany at 14:10 that eventually sealed the second opportunity (15-11) to bring it home 3-2.
German head coach Ulf Quell was proud of his team’s performance: “It was a very hard match. I am proud of my guys and happy for them. They deserve to have this win. They have worked so hard in every game. It is a good experience for the team to have this success. It was very important that we won, because it was our last chance to keep the hope of going to Poland alive. Each game is important, because we develop and learn as a team. Everything is open tomorrow where we meet Denmark. We have the chance in our hands, now we need to grab it”.

ECJ M: Bulgaria and Turkey put up a terrific fight