BERLIN Recycling Volleys experience a very special away match as they play Lokomotiv NOVOSIBIRSKin the 2013 CEV Volleyball Champions League this Wednesday. “If we are able to continue performing at the level we showed in the matches against VfB FRIEDRICHSHAFEN and Generali UNTERHACHING, we might have a chance”, team captain Scott Touzinsky says. 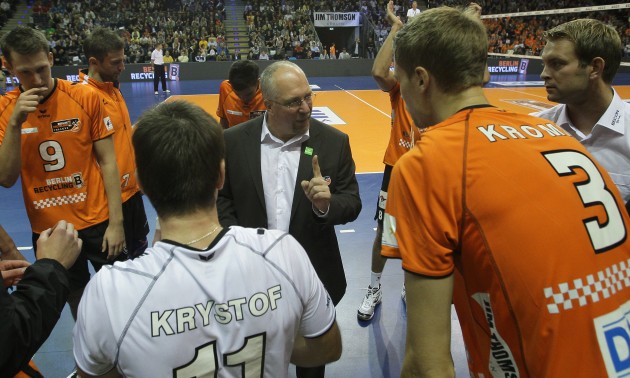 Not with any of the other teams that were drawn at the DOL in Vienna the journey would have been that long and exhausting. Departed on Monday afternoon local time, the 2012 German national Champion is expected to arrive in Novosibirsk on Tuesday morning – having travelled for ten hours.

It’s not only the trip though that demands much from the team. Playing one of Russia’s standouts and the supposed clear-cut favorite in Pool B is probably the hardest challenge BERLIN Recycling Volleys have ever taken up. “NOVOSIBIRSK is a tough nut to crack”, says head coach Mark Lebedew about the current Russian cup winner. “If we are able to continue performing at the level we showed in the matches against VfB FRIEDRICHSHAFEN and Generali UNTERHACHING and if we can handle both the travel strain and the jetlag, we might have a chance”, team captain Scott Touzinsky says.

After a clear 3-0 win for each team in the first round of action both sides tackle the second leg having recently scored speedy 3-0 wins in their respective national leagues. BERLIN saw off MOERSER SC in straight sets (25-14, 25-16, 25-17) whilst NOVOSIBIRSK defeated GROZNY also in three sets (25-17, 25-13, 25-21). Although assumed as the definite favorite NOVOSIBIRSK does not take the match too easily: “We will cross our ways with a very strong opponent” head coach Andrey Voronkov says. However, the goal for the fourfold winner of the Siberian Cup is clearly set:  “We will be doing our best to score three home wins” concludes setter Alexander Butko.