Greece in contention for a ticket to the final round of the Youth European Championship after winning against Azerbaijan. Anthi Vasilantonaki and Olga Strantzali had a good game. Aleksandr Chervyakov and Olga Strantzali gave their statements after the game. 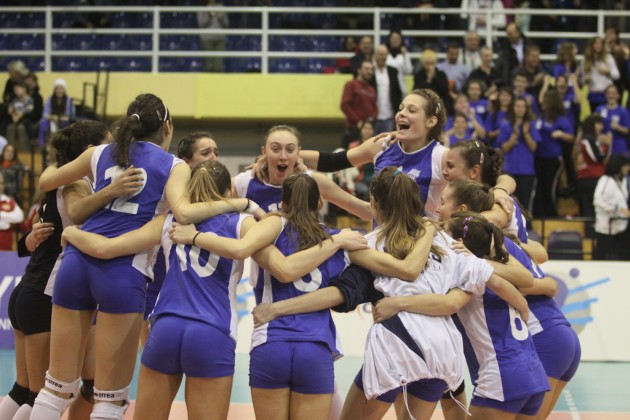 Greece started out quite strong claiming the opening set but their opponents played intelligently, especially in defense, thereby forcing the home heroines to make many mistakes and pocketing set 2 and 3.

In the fourth set Greece had moved up 19:10 before the game was stopped for half an hour since that blackout had left the sports hall in darkness and after the match resumed, Greece cruised to the final 25-15 that called for the tie-break.

Greece opened with a splendid 5:1 run but Azerbaijan responded well flipping the charts around (12:13). However, two attacks killed by Anthi Vasilantonaki and an ace contributed by Olga Strantzali sealed the final 15-13 and Greece’s second win in the tournament.

“I think that everyone enjoyed this game. Yesterday we had edged Spain 3:2 and today we lost with the same score. Greece has a strong team and I think they can make it to the final round” said Azerbaijan’s head coach Aleksandr Chervyakov.

“We knew Azerbaijan mainly relies on two players but we could not stop them until the fourth set and we also made too many mistakes. However, we eventually found our rhythm and in the end we got the upper hand” commented Greece’s team captain Olga Strantzali.

GRE W: Despite playing without 2 starters,...