Russia and Greece will be playing on Saturday for the sole ticket available for making it to the 2013 FIVB Volleyball Men’s U21 World Championship via the qualification tournament held at “Volley Grad” in Anapa. Greece claimed their third win in the competition by routing Austria in straight sets. 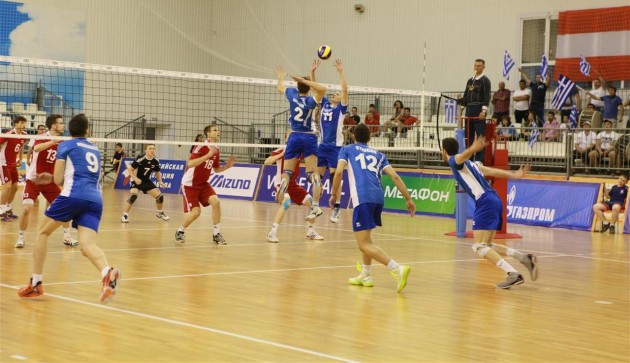 Greece claimed their third win in the competition by routing Austria in straight sets (25-21, 25-16, and 25-18). Once more supported by members of the Greek community in Anapa, the young guys from Athens showed their potential and though Austria played fairly good, still could not stop the march of their opponents. Greece has an immaculate set ratio (9:0) in the tournament.

The home heroes of Russia could emulate their next and last opponents in the competition as later in the afternoon they cruised past Montenegro in straight sets too (25-12, 25-13, and 25-11). This was the very last game of the tournament for the guys from Montenegro while the home favorites were cheered from the stands by the members of the senior national team which is also preparing in Anapa for the start of the international season. On Saturday Russia and Greece will round out the tournament with a much awaited clash whereby the sole ticket available to the World Championship will be eventually assigned to one or the other side.