The team of A.O. MARKOPOULO Revoil just won gold at the U19 Women’s Championship of Athens thereby also claiming their ticket to the Pan-Hellenic Championship that is set to follow later this season. 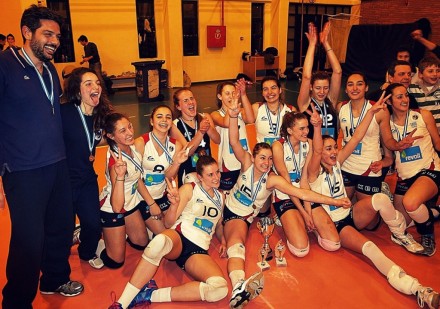 After losing two consecutive finals – to Iraklis KIFISIAS in 2012 and to Panathinaikos last year – this time the young players of A.O. MARKOPOULO did not miss on their chance to top the charts as they edged past Iraklis after three close sets (26-24, 26-24, and 28-26).

The party got started at the end of the game as soon as team captain Stavroula Polidorou received the trophy for the winning team.

A.O. MARKOPOULO Revoil added another two prizes to their collection at the end of this Championship, as Nasia Liagi and Alexandra Psoma were awarded as MVP and Best Spiker of the tournament respectively.

Psoma is a current member of Greece’s national team and is set to compete later this year in the qualifiers for the Final Round of the 2014 CEV Women U19 European Championship.

The bronze medal went to A.C. Panellinios after a straight victory over the likes of Agios Dimitrios.

The final match of the tournament held at the Kantza sports hall in Athens was attended by the head coach of the Greek national team, Ioannis Kalmazidis, by the Vice President of the Hellenic Volleyball Federation Ioannis Stouraitis as well as by the President of the local Volleyball Association of Athens, Mr. Kostas Allagianis.