GRE M: Domination of Olympiacos goes on, 14-0 against Panathinaikos

It was like in the best days of Greek volleyball. Packed stands, two fierce rivals, extremely exciting match… Panathinaikos and Olympiacos presented a fantastic volleyball show in Athens, and eventually it was Olympiacos who seized a close win and extended the unbelievable streak against the eternal opponent! 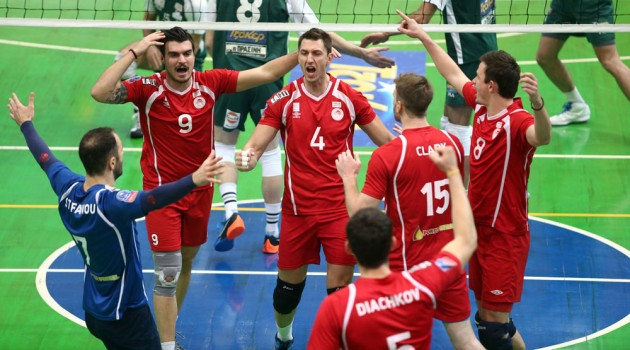 The absolute hero of this derby was Andrii Diachkov who made 30 points, including the very last one of the game.

Olynpiacos could have ended this game much quicker, as Piraeus side was two sets ahead. However, PAO responded and tied the game at 2-2! Fans went crazy! They knew that their club was so close to end the domination of the fierce rival, which lasts for 4 years!

Yes, Panathinaikos won the last Athens derby in the Greek Championship back in 2010! Since then, the score was 13-0 for Olympiacos!

And after this match it extended to 14-0, as red and whites won the tie-break! Away team started strong and reached 8-5 lead. However, PAO equalized to 8-8, and then took over the lead at 10-9! Situation was even worse for Olympiacos, as Diachkov suffered an injury in that point and had to leave the game. But, his teammates were there to replace him.

They brought back the lead for Piraeus side at 11-10, and then extended it to 14-11! Then Diachkov returned to on the court, and finished the job.

Recall that on this derby PAO had a help from its ex-player Liberman Agamez,

PHOTO OF THE DAY: Agamez at big Athens derby!