One of the leading figures in the team Lube Banca Macerata is 28 years old Dragan Stanković. Serb does not hide that he was glad to meet with Polish champion and a good friend from Serbian national team, Nikola Kovacevic. This and other volleyball news read on Worldofvolley.com. 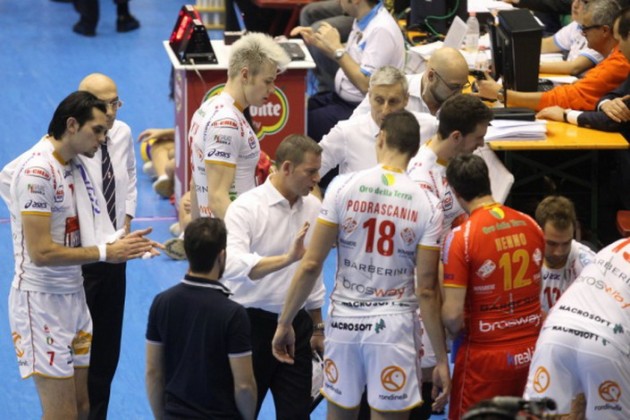 “We know each other very well and we are all in good relations, as well as with other colleagues in the team. I look forward to meeting with Nikola and I can not wait to compete with his team” Dragan Stankovic said.

Are you satisfied the results in the Play-off Champions League, now you will play against the Polish champion Asseco Resovia?

“I think at this stage of the Champions League, the play-offs, you have to respect each opponent. Polish team is certainly very good and we have to play our best volleyball to overcome it. Match between champions of Italy and Polish promises to be interesting. As for us, we come to Rzeszów with desire to win, to put ourselves in a better position before the second leg in Macerata“.

Achieving good result in the Champions League is a priority for this year for Lube Banca Marche Macerata?

“Yes, because after winning the Italian championship last year, we said that now we want to win the European Cup. For our club’s Champions League is very important and is one of the main goals for this season. We are determined to advance to the Final Four and compete for the Champions Cup“.

Not so long ago, you have one trophy that was the goal – Italian Cup. You have lost from Trento in the tie-break.

“In the final game of last season, we were also losing 0-2 against Trento, but we were able to turn and win the match and won the title in the tie-break. This time it was hard for us to repeat this achievement, because Trento played really well. Our setter had a difficult task, because the inaccurate adoption have to run the ball, and in this case it was difficult to think of a creative game in attack. Despite the negative result we feel that we gave it everything and tried to resist to the end against the offensive power of Trentino. We know that in the future when we play the next meeting for the high stakes, we will be able to overcome Trento“.

Your rivalry with Trentino is amazing and very tense.

“We are two teams who dominated in Italy, and very often we play with each other in matches with high stakes. Trentino won Cup Final in Milan and we has already fought each other in the finals of the Super Cup and Italian Cup. I think our fierce rivalry is normal. Both teams want to win trophies. Certainly emotions and fierce fighting in our duels is not lacking, but it’s not surprising, because each of us is fighting for all and no one want to lose”.

Do Macerata has already had the most difficult time of the season when Jiri Kovar and Cristian Savani had severe injuries?

“I think every team who have lost two very important players would have problems. We had 2, maybe 3 weaker matches where we did not play good volleyball. With time, however our game look even better in spite of severe staff shortages and a few weeks we have been pretty good. We do not went down below a certain level of play, and I hope that in future meetings we will maintain this positive trend, especially in matches as those coming against Resovia in the Champions League“.

POL M: Andrzej Kowal – “Polish Cup is a trophy itself”