Serie A Sustenium, only Serie A league without postponed games: All the A1 and A2 games have been played regularly this weekend. The championships organised but the Italian Volleyball League Men have been the only one not to have suffered schedule modifications. “Organization, coordination and sense of responsibility, we are proud of our clubs” said CEO Massimo Righi. 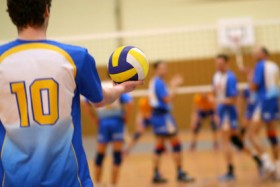 Serie A Sustenium, no postponed games. Round 18: Trento extends lead. Macerata beaten in Cuneo. A2: Perugia and Castellana flying.

Modena is back to winning and it does it emphatically with a sweep on Padova. In reality though, the game was tighter than the score suggests. MVP: Modena’s middle blocker Marco Cosimo Piscopo with 100% in attack and 6 blocks.

Daniele Bagnoli (coach Casa Modena): “I am satisfied with the win and also with the performance of the team, there has been good moments. Piscopo is really good in blocking, I am more surprised when he doesn’t get one. As for the team, we have various starting line up possible, I think the boys have understood that by now, we change often in training too. Now we’ll focus on the Trento game, there couldn’t be a better test than playing against the best before going into the Italian Cup”.

Andrea Semenzato (Fidia Padova): “We played a good game but Modena was stronger. We had a few ups and downs and against those teams you have to be constantly at your best and never make any mistakes. It is tight at the bottom, we’ll fight until the end”.