Plans for a splendid sports hall that shall turn into the home of ice hockey team ZSC Lions and the local Volleyball heroines of Volero were unveiled this past Thursday in Zurich. The facility shall be available by the start of the 2017/2018 season. 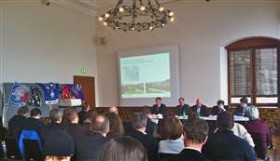 Initially that sports hall was conceived exclusively as ice hockey arena but Volero has decided to join the efforts of the ZSC Lions to finally dispose of a first-class facility that would solve many problems, as the club is always struggling to get the right conditions to play its home matches in domestic competitions as well as for its European campaigns. Volero is currently experiencing problems also for staging training sessions as the club is sometimes touring across the city of Zurich to find a sports hall whereas such operations should rather be centralized in one spot. The marketing and commercial campaigns of Volero were also regularly sidelined by the limited capacity of the sports hall “Im Birch” where its Champions League matches are being played only upon an exceptional approval given by the CEV.
“This sports hall fits perfectly to the official strategy worked out by our department” said the Sports Councilor of Zurich, Gerold Lauber, as the plans for that facility were being discussed with the press and many other media. The hall shall have a capacity of 9’000 seats for ice hockey competitions with a comprehensive area of 29’000 square meters.
As for Volleyball, Volero shall get an area of 8’400 square meters for a capacity of 4’000 seats, with the hall being provided also with a restaurant and an underground parking area with 200 up to 400 parking slots.