Italian media are not satisfied with CEV’s choice of referees for quarterfinal match between Serbia and Italy at European Championship in Germany and Switzerland. 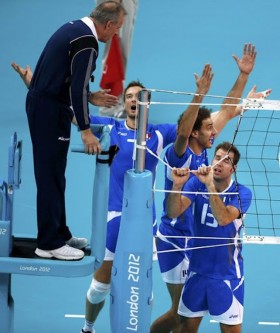 Italians have unresolved bills with Loderus

For them, it seems like men’s final between Italy and Serbia played in Vienna in 2011 was yesterday with all the tensions and post-game controversies between the Italian head coach Mauro Berruto and the Dutch referee Frans Loredus at one hand, and between the President of Italian Volleyball Federation Carlo Magri at one side and chairman of Serbian Volleyball Federation Aleksandar Boričić at the other.

As Italian media emphasized there was a fierce controversy following an irritating arbitration of the Dutch referee at the expense of Italy in that EuroVolley finals which Serbia won.

Today Loredus will be the referee of another Italy – Serbia match, the one between the “azzurre” led by Mencarelli and Serbians led by Terzić.

Italian media asks a question how is it possible and should the Dutch referee participate at Italian matches anymore?

The second referee at the match that is scheduled at 20:30 at “Hallenstadion” in Zurich is Azerbaijan Eldar Zulfugarov.

See the profiles of national teams of Serbia and Italy.