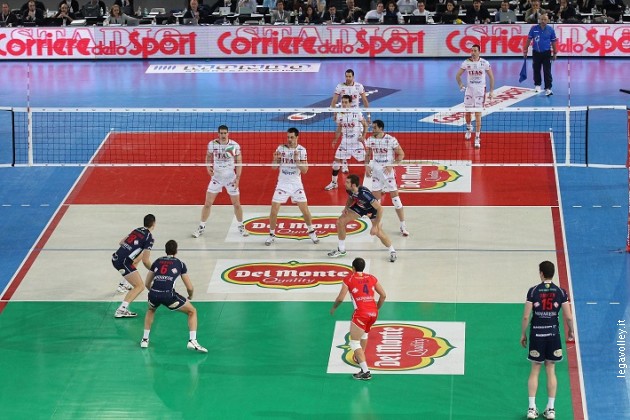 Trentino conquered the Italian Cup in 2 hours and 18 minutes. Stoytchev’s team fell 2-0 down but fought back and snatched its second cup in history as the game went to the wire. Serve, dig and attack made the difference in the first two sets for Macerata, and Giuliani’s team even built a 5-point gap at 18-13 in the third but Trentino’s reaction has been imperial (25-22). Stoytchev’s men had the momentum and sprinted out of the starting blocks in the fourth (8-1). The tie-break was tight all the way and eventually decided by a Kaziyswki block on Omrcen.

Radostin Stoytchev (Itas Diatec Trentino): “The game was going very well for Macerata, they went all out with the serve, they were doing brilliantly in dig and they deserved to dominate the two first sets. In my opinion, this was top class volleyball, it’s difficult to play when the opponent perform that well, they basically did not miss a thing. I am satisfied with the fact we found the resources and the mental strength to stay in the game. Even at 16-12 in the third, it was tough to get back in it, but we managed to win that set and then things changed. This proves that our strength is the team not the individuals”.

Matey Kaziyski (Itas Diatec Trentino): “This has been the most difficult victory ever, but also the greatest one because the game was very near from being lost. We came out of a very tricky situation and to be honest at one point I really thought I would not win the Italian Cup”.

Andrea Bari (Itas Diatec Trentino): “At 2-0 down, it was difficult to think we could win, but we thought we had never won a trophy coming back like that. But to be honest I don’t know how we managed to make it”.

Mitar Djuric (Itas Diatec Trentino): “Macerata played unbelievable volleyball for two sets, then a new game begun. We had nothing to lose any more so we just took some risks in every fundamental. I think we did a better job under pressure, which was probably the key. I am extremely happy because this is my first year in Italy, the first with this team and here is the first Italian Cup”.

Alberto Giuliani (coach Lube Banca Marche Macerata): “Trento is a great team, which has seven lives and Juantorena. He can win games single-handedly and he did it in the fifth set. As for us, we lost our way and let them back in the game. This was a good tie-break played at a very high level, and lost for one point. This games proves that at the end of the day we are not that far from Trento. We did not manage to maintain the same rhythm, and this has been happening to us for a while, maybe because of the many games played in a short period of time, especially of the International players that never had any time to get a breather. Anyway, I am satisfied. Macerata played as a team today, but there were great individuals on the other side of the net”.

Cristian Savani (Lube Banca Marche Macerata): “We were ahead in the third, if we’d gone 19-13, that would have been it. In the end, the usual Trento came back to its normal standard. In such a tight end, anything can happen and you can’t expect everything to go as you would like”.

Dragan Stankovic (Lube Banca Marche Macerata): “We are so disappointed, we were 2-0 and 18-13 in the third. In the clutch moments, Trento got the points thanks to a superb Juantorena, especially on the serve. We had a good game but in the end we made one more mistake than them”.