"Spettacolo" as Italians would say. Trentino and Lube have played perhaps the best match in the Serie A so far in this season! 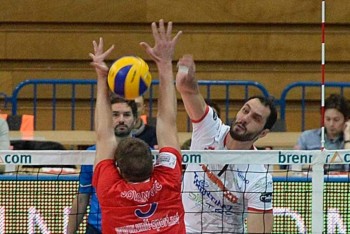 Eventually it ended with the big win of Trentino, after a tie-break and a big drama at the end. Home team had two set balls at 14-12 in the fifth set. Firstly, Matey Kaziyski served the ball into the net, while then Giulio Sabbi saved Lube with an ace! Yes, Sabbi has recovered from an abdominal injury and played in this derby!

His next sevice was also fantastic, but Trentino managed to organize an attacking play somehow and score a point for 15-14. And, then Emanuele Birarelli had very good float service, reception of Lube was not good and Trentino had a counterattack and a match point. Filippo Lanza finished the game with a strong spike.

RUS M: Pavlov – “Board assures us everything will be fine”