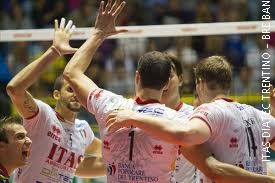 Special guest, Marco Melandri, motorcyclist, could not have chosen a better volleyball game. This proved to be a thrilling match, in each one of its five sets, and it lasted for over two hours and a half. At 5-8 down in the tie-break, Trentino fought back to clinch it as

Kaziyiski was named MVP of the game.

Emanuele Birarelli (Itas Diatec Trentino): “We play every three days so a little drop in form can happen. It occurred in the third set, but credit as well to Cuneo. We did a good job to find our game in the most difficult moment of the fifth set”.

Francesco Fortunato (Bre Banca Lannutti Cuneo): “This has been an incredibly spectacular game, which Trento deservedly won in the end, although Cuneo proved it was in it right until the end. The tie-break turned into a roller coaster, though”.

Austria: A clear victory over the Enns