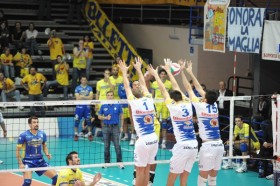 Daniele Bagnoli (coach Casa Modena): “In terms of level of play we made some improvements compared to the last two games. But as soon as we had a dip, Latina showed all its quality and made it difficult for us. We have to be happy, although we have not been at our best in recent weeks, we haven’t lost too many points”.

Silvano Prandi (Andreoli Latina): “I’d like to thank the Modena fans for the applause and welcoming. As for the game, Modena put us under great pressure with their serve and we struggled in attack. These are the games we need to gain experience. Next is an important one against Padova”.