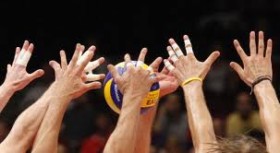 Despite a difficult week, Piacenza started off well but Belluno took charge from the second time out and won it in three sets. MVP Fei.

Roberto Piazza (coach Sisley Belluno): “We have done a great job to win this one. Piacenza was really up for it, we knew it, and in the first minutes of the first set, they really put us under pressure. We did well to stay composed and improve by converting our attacks. Next is Trento, super team which we’ll try to disturb. But I want to enjoy this victory until tomorrow”.

Angelo Lorenzetti (coach Copra Elior Piacenza): “Another bad game, but at least today we have fought until the end. The many changes during the season? It was right to try the newcomer Kampa and others who play usually less. Shame we made that many mistakes”.

President of Italian VF about Berruto –...