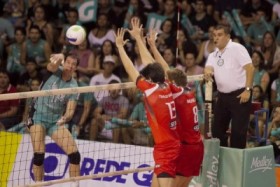 A new member of Ravenna, whose full name is Bruno Augusto known as Zanuto, is 196 centimeters tall and was born in St.. Paul on March 3, 1983.

He played in Brazilian teams: Minas, Banespa, Unisul and Florianapolis, then moved to Italy where, from 2006 to 2008, he played for Andreoli Latin and after going to Poland to Gdansk Trefl.

In 2010 Zanuto returned to Brazil in Cruzeiro, then in Montes Claros, and finally, in 2011/2012, in Medley Campinas. He was published in the quarterfinals of the playoffs in the Superliga by the Volei Futuro, then defeated in the final by Cruzeiro.