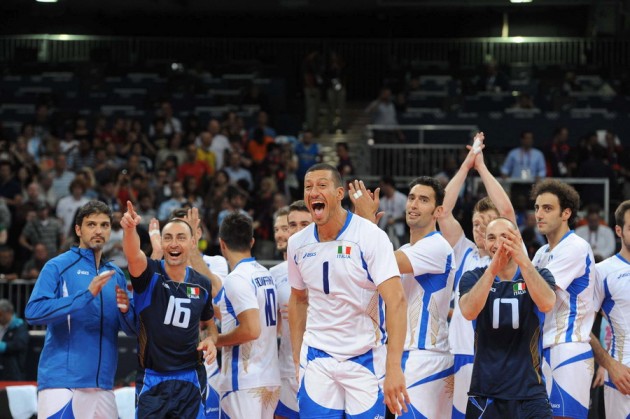 Italy’s offense was anchored by Michal Lasko and Ivan Zaytsev who scored 18 and 17 points respectively while Facundo Conte paced Argentina with 14. Italy literally outclassed their opponents in blocking, totaling 14 vs. only 6 for the South Americans, and thereby extended its positive tradition at the Olympics for a fifth win over Argentina in as many matches.

The Italian team, ranked No.6 in the world, looked the more assured side right from the outset. They played solid, mistake free volleyball and took advantage of Argentina’s ragged early play to take the first set 25-17.
Italy’s movement around the court was causing Argentina’s blockers problems. This led to a large percentage of Argentina’s block attempts failing as the Italian spikers thumped the ball into the court on a regular basis.
Argentina tightened up their performance in the second, taking the first three points of the set and never letting the Italians back into contention. Argentina won the set 25-21 to even the match.
Argentina seemed to check out in the third set, falling behind early in the face of a very effective Italian spike rate and being unable to recover enough to get within eight points at the end of the set.
Argentina came out of their slump at the start of the fourth set to take an early lead, but they were unable to maintain the intensity and soon fell behind. Once Italy had the lead in what would be the final set, they never looked back.

Ivan Zaytsev got off to a fast start for the Italians, leading all scorers with six points in the first set. Although unable to keep up that pace, he continued his efficient play for the whole match, particularly with his high-powered serves. He finished with 17 points. Michal Lasko also played well, ending the match with five blocks to go along with 13 points on spikes.
Facundo CONTE was the main man for Argentina. Despite being relatively small at just 198cm, his high-flying play was a sight to see. Conte finished with 14 points, but more impressive were his reception statistics (16/19, 84.21%).

Argentina falls to one win and one loss in the tournament and will next play a Poland team looking to recover Tuesday’s shock 3-1 loss to Bulgaria while Italy will face Great Britain on Thursday as well.

OG M: Priddy family gets together to cheer on Reid’s quest for second Olympic gold

OG W: Volleyball players are ready to “die” for the sake of victory over the Russians

ITA M: “We can only get better”

Domination of Kimberly Hill – amazing save...