OG W: Volleyball players are ready to “die” for the sake of victory over the Russians

Competitors leave on a match from volleyball national team of Russia as on last fight, said the agency R-Sport attacker of national team Evgeniya Estes. 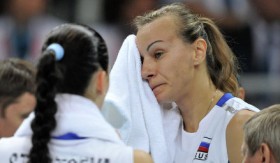 On Saturday the Russians had at the Olympics opening match against a team from the UK. The game ended in victory for Sergey Ovchinnikov in three sets.

“Any team in game plays well against us, strangely enough. I do not know what effect on contender, but with whom we are playing, our team is all like a red rag. To defeat Russia, they are ready to die on the court,” – Estes said.

In the preliminary round to Russians still have to play with teams from the Dominican Republic, Algeria, Japan and Italy.

“We are fortunate that the first match is quite easy. We still have time to play, get used to the audience. Day after tomorrow will already be a bit stronger team. Dominican tenacious, good at defense. They have nothing to lose, so they will fight for every ball,” – noted Estes.

“And the Japanese,  it is mandatory us. There will be a good fight. Major matches in the group will be just off the Japanese and Italians. We shall be involved, then we shall make, and in the quarterfinal will have been cool to fight,” – concluded the attacker.

Situation is now dramatic: Both Men’s and...