OG M: Priddy family gets together to cheer on Reid’s quest for second Olympic gold

Sharon and Ken Priddy have been following their son, Reid, almost everywhere. The outstanding US American outside hitter has been spending the last few years in Russia and his parents have found their way to Kazan as well as to Siberia’s largest city, Novosibirsk, to cheer on their hero even in matches of the Russian national league. 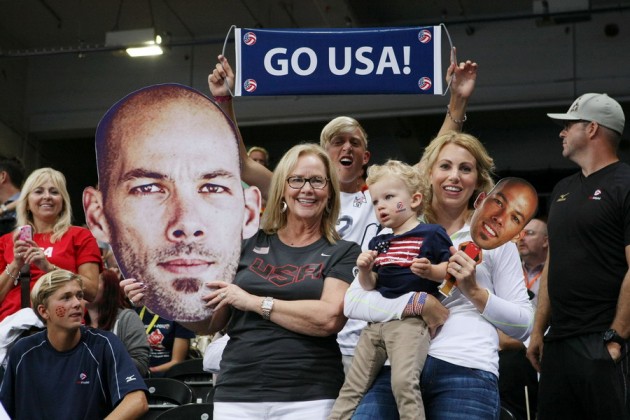 “This is our third Olympics” says mum Sharon, “after being in Athens and in Beijing, we are happy to follow our son also here in London”. Sharon could not spot her daughter-in-law and Reid’s baby in the packed stands of Earls Court on Tuesday waiting for Team USA to play their second match of the Olympic tournament, but she was in a good company, together with a couple of volleyball coaches also from the US.

“We came here on Sunday for the first match of our son against Serbia and we really liked the venue, it is just wonderful. I was just a little bit surprised by the attitude of the spectators; we are pretty much used to be loud and cheer continuously on our heroes but here it was rather quiet, as if the audience was going to follow a tennis match rather than a volleyball tournament. One of our friends was even gently invited by a 9-year old boy to stop being so noisy”. After watching the USA clearly edge Serbia in straight sets, Sharon and Ken moved to the Aquatic Center where they eventually saw their compatriot Dana Vollmer win gold in the 100 m butterfly by setting a new world record. “It is not that easy to get tickets for other venues and events. Actually this was the only session we eventually were able to attend thanks to the help and assistance provided by a hospitality house we have been to”.

Reid was born in Richmond, Virginia, and stayed there up to his second grade before the family moved to California where Priddy still resides especially since the training camp of Team USA is located there. Like many other American families, Sharon and Ken have been touring around the US, settling down also in Florida and Arizona before going back to their hometown in Virginia. The family group was easy to spot in the tribunes since they were waving some paddles portraying Reid especially produced by USA Volleyball, but actually as Sharon reveals, there is a comprehensive set with an individual portrait for each one of the players included in the roster nominated by coach Alan Knipe.

“If we play our best, I believe that we can repeat our performance from Beijing and claim gold once again” stresses Sharon, “even though there are many strong squads here. It’s the Olympics, so you can’t expect to cross your ways with any weak side if you want to make it all the way through to the top. However, from what I have seen so far, Russia and Brazil remain the strongest competitors for our heroes. Poland is also very powerful and I was extremely surprised as I was told that they lost to Bulgaria this morning”.

Reid’s father used to be a basketball player and met Sharon since she was one of the cheerleaders following the collegiate team he was playing for. Ken is very quiet but jokes as he points out his wife is still cheerleading even though he has stopped playing quite a while ago. “By the way, I’d bet on our ladies to win gold here in London. They are playing some superb volleyball and it would be just fabulous if both US teams could finish on top of the podium here in London” points out Sharon with a bright smile. She still has got to wait for the end of the game opposing Italy to Argentina to see her son in action but she just can’t stand the emotions brought by the Olympics: “As I said, we have been to Athens and Beijing but the Olympic atmosphere is special in itself”. Reid’s wife and baby finally showed up, so the family portrait was complete before the first whistle of the match opposing Team USA to Germany.