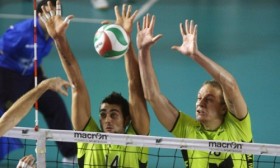 Without Bjelica, Roma offered a poor performance to its fans in its last home game of 2011 and was swept by Piacenza.

Giulio Sabbi (M.Roma Volley): “At one point we totally lost it in the first set and I can’t seem to find any explanation for it. We were five or 6 points ahead, after which we started to make one mistake after another. Then, we never managed to get going again. Losing a set like that can happen but then you have to start over as if it was 0-0”.

Vladimir Nikolov (Copra Elior Piacenza): “Hopefully this is the victory that will get us to start over. We had been working well in the gym but the results were not coming. I am extremely satisfied today because we won against a strong team, which plays good volleyball”.

Italy: Round 11 Serie A1 Sustenium

Italy: The big game in numbers!