The second matches of the playoff semifinals of Serie A1 will be played today. 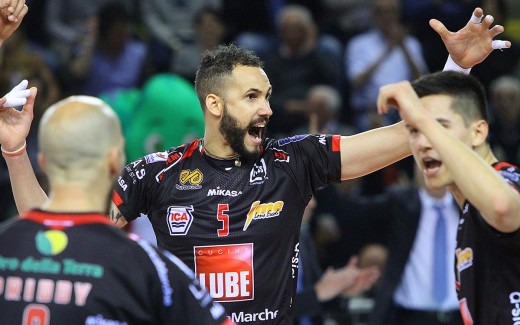 Perugia have the lead in series against Lube as they managed to surprise Blengini’s side on the road. Now, they will host the first placed team in regular season and all we can say that pressure is growing on Lube.

Blengini will have difficult task to prepare the team for tonight match trying not to think about the Champions League that will take place during the upcoming weekend in Krakow.

“We are going to Perugia only with one goal – to win. Compared to the first match, we have to be more aggressive in decisive moments. Perugia convinced us that they are very strong team. This match also will be useful for us as a preparation for the Final Four of the Champions league that awaits us next weekend” says Juantorena.

“The result of the first match is very important as we now have the home court advantage. We have to be focused against Lube and to get them serious as they won all games in previous two seasons at our court. In the first match we had great percentages in attack and that gives us a hope to that we can repeat them and to win again. It will be uncertain game. The only difference will be that fact that we are going to play in front of our fans” says libero of Perugia Fabio Fanuli.

Trentino are in the same situation like Lube. They have to win the match against Modena but have to keep stamina for the Final Four in Krakow.

“We will have to play a very different game from the previous one” – says the head coach of Trentino Radostin Stoytchev – .”Modena deserved to win Game 1, but we were not able to do what we promised before the race. It is obvious that everything starts from reception; until we were able to keep good percentages, as in the first and second set, the match was in balance. We have to control their service and improve our can be the key not only in Game 2 but in the whole series.”

Modena are coming to Trento fully relaxed as they managed to beat Trentino in the first match. If they win, they will have huge advantage in series. The pressure grows on Stoytchev’s side…

ITA M: Atanasijević has a message for...

Italy: Hosting Milan in the cup