ITA M: Shocking news – Modena close to giving up on Serie A1 next season!

DHL Modena are going through rough time. Even their survival in the Italian Championship is doubtful since, at the moment, they do not have the money to register for the season 2016/2017! 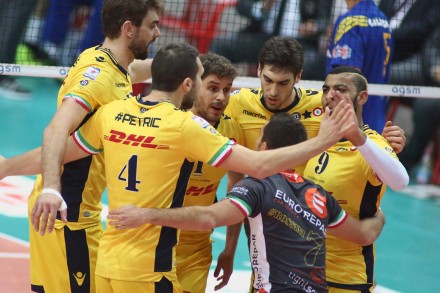 The Serie A1 champions have raised a crowdfunding campaign to collect approximately one million euros (until May 30) to keep the squad together, but it seems it will not be enough.

The President of Modena, Catia Pedrini, is very busy at the moment, trying to bring some major sponsor to the club. She met with heads of several companies – “Nordmeccanica” (sponsors of newly formed Liu Jo Nordmeccanica Modena), “Bper” and “Grandi Salumifici Italiani” (under the brand of club’s ex-sponsor “Casa Modena”) as well as with the current sponsor, “DHL”.

Even former Chairman of Formula 1 team Ferrari and President of “Alitalia” (the national airline of Italy), Luca Cordero di Montezemolo, was contacted for help.

Officially, Modena are on the list of participants for the 2016/2017 CEV Champions League…