The National Teams that will compete at the FIVB World Championships in Poland and Italy received the Flag from President Enrique Peña Nieto at Los Pinos. 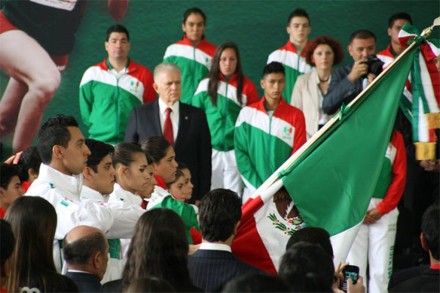 Men’s and Women’s Volleyball teams attended to the Ceremony that took part at the Francisco I. Madero Plaza inside the Presidential House, along with the Delegation that will attend to the II Youth Olympic Games of Nanjing 2014, as well as the National Basketball Team that will also play a World Championship this year in Spain.

“Being part of a National representation means something special,” said President Peña in his speech.

“Mexico is a country with young and talented people, with preparation and a mentality that can make them able to compete and success in the world.”

He remarked that the young players of different sports that were present are a great example of the potential that lays within the country.

“You have achieved many positive things and such a great success among thousands of youngsters, this is not less, you are already winners,” the President added.

To read more news from this country click on Mexico.