Colombia is the new Champion of Pan American U-18 Girls’ Cup. 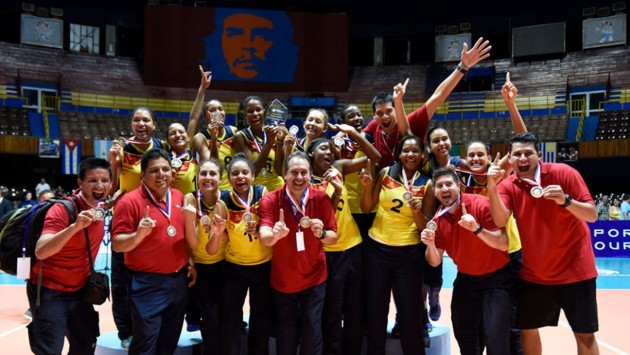 The South Americans did not want to be repeated the history of the preliminary round where they were defeated by the host team (1-3). This time they neutralized them with their powerful service and effective blocking, and making fewer errors (23-34).

Emelys Martinez (12) and Manuela Ibarguen (11) were the team top-scorers, while the Aliama Cesé was the only one who scored double figures (14) becoming the match best scorer.

The Colombian athlete, Valerin Carabali, champion team captain, was awarded as the Most Valuable Player of the IV Pan American U-18 Girls’ Cup.

Madeline Guillen (DOM) was the Best Scorer with 94 points (81-8-5) and the Second Best Hitter only surpassed by Aliama Cesé (CUB).

At blocking, the two privileged players were the South American Valerin Carabali and the local one Yanisleidys Viltres.

In addition, another Dominican player, Yanlis Feliz Sena, was the Best Opposite Player.

The final standings is as follows: