Tokyo 2020 delegation Olympic Bid visited FIVB headquarters in Lausanne on Thursday to present their proposals for volleyball and beach volleyball venues should their city win the competition to host the 2020 Games. Arakida Yuko was in the delegation, she won gold at the 1976 Montreal Olympics and managed the Japanese women’s volleyball team from 2005-2007 and 2009-2012. 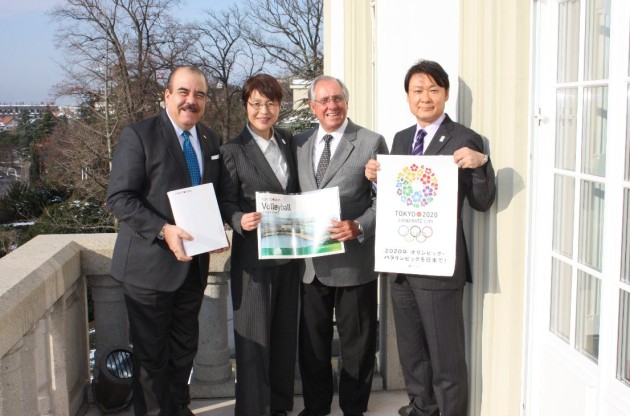 The delegation included Japanese volleyball legend Arakida Yuko, who was part of the team that won gold at the 1976 Montreal Olympics and managed the Japanese women’s volleyball team from 2005-2007 and 2009-2012, is now sports director for Tokyo 2020. She was joined in Lausanne by Sakata Hiroshi and Nakamori Yasuhiro.

The proposed venues for volleyball and beach volleyball would both bring athletes and fans to Tokyo Bay’s waterfront. The 15,000-seat Ariake Arena, towards the eastern side of the bay, would be home to the volleyball competition while the 12,000-seat Shiokaze Park, further west, would host the beach volleyball matches.

The Tokyo bid is promoting the city’s ideal environment for athletes, with world-renown safety, cleanliness and abundance of greenery, as well as its exceptional accomodations, infrastructure and transport.

NOT FOR EVERYONE!!! Serious injury of Destinee...