BERLIN Recycling Volleys lost in a tie-breaker to Russia's Zenit KAZAN in the first match for the Playoffs 12 of the 2013 CEV Volleyball Champions League. Robert Kromm and Mark Lebedew gave statements. 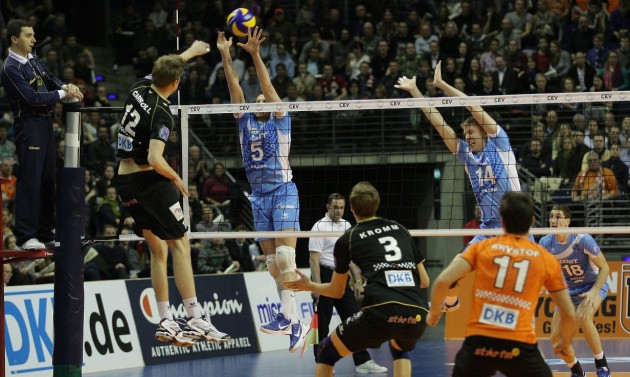 Injury-plagued as wing-spiker Roko Sikiric had sustained a knee injury during final practice on Wednesday morning and Robert Kromm (wing-spiker) being feverish, BERLIN was nevertheless not willing to make it easy for Zenit. In front of 6’821 frenetically cheering spectators the home side took an early lead (4:1) in the first set. With a recovered Robert Kromm and the youngster Björn Höhne on the wing position BERLIN did not slacken its grip forcing the Russian heavyweight to mistakes (16:9). Getting back in touch as BERLIN was not able to control the lethal attacks, Zenit steadily closed the gap (23:23). Eventually it was a disputable decision that brought KAZAN on set point: the block of BERLIN did not touch the hit by Zenit that went out as the TV broadcasting proved but KAZAN took the set (25-27).

BERLIN showed much resistance to keep in touch in set two, but Zenit seemed to have found its rhythm (11:14). The hosts, pushed by their crowd, steadily managed to close the gap (14:14). But the Russian standout proved its superiority in service, attack and block as the team further pulled away (14:18, 15:20). As KAZAN in set one, BERLIN right in time found back into play as both teams incredibly fought point for point (23:23) and eventually set number two went to the local heroes (25-23).

Driven by the second leg and an ear-splitting atmosphere at Max-Schmeling-Halle, BERLIN justified its qualification for the Playoffs 12 taking one point after another. The spectators got to see a high-class Volleyball match in which the home side managed to keep it up with the heavyweight of Russia. Pulling further away (17:9, 20:13), BERLIN increasingly forced Zenit to make mistakes also taking set number three (25-17).

Zenit out for revenge for the clear defeat in set three took over control in leg four (5:8) and eventually it was captain Maxim Mikhaylov to mark the lead for KAZAN at 10:16. The Russians further pulled away as BERLIN could not control Zenit’s attacks (13:21) and took the fourth set.

The match was to culminate in the tie-break. Neither of the two teams could pull away. Eventually BERLIN took a small lead (8:6) and kept it scoring point after point (13:11) but Zenit came back (13:13). Being on match point, KAZAN could not take this first opportunity, neither could BERLIN (15:14) and eventually Zenit could celebrate its happy end in a nail-biting thriller (16-18).

“We managed to give Zenit a hard time”, Robert Kromm said after the match, adding: “We put them under pressure as they were not able to play their game. I hope we will be luckier in the end next week.”

A proud but disappointed head coach Mark Lebedew said: “I’m delighted to see the team coping with the set-backs of the last days. But in the end, it is just said we did not bring it home.”