NORCECA W: Teams set to battle for ticket to Brno in Havana 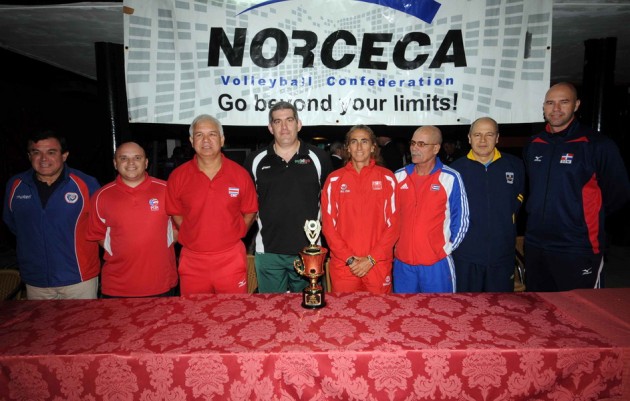 Defending champions Peru, Dominican Republic, Mexico and Colombia, already qualified to the world championship, will compete in Pool A, while the non-qualified teams Chile, Costa Rica, Puerto Rico and hosts Cuba will battle for the ticket in Pool B.

The coaches of the teams expressed their opinions and commented about their goals following the General Technical Meeting held on Sunday night.

Hugo Jauregui (Chile): “Cuba is the favorite in our Pool B, although all the rivals are powerful, but Puerto Rico has not participated lately in the international events. These cups were an aspiration coming true and now with the added value of offering a spot to the world event in a clash between north and south.”

Eladio Vargas (Costa Rica): “I have been working with the team for only six weeks. We started a process of preparation towards the U-20 Central American and a qualification to the Pan American Cup and at the same time to ensure the renovation of our senior national team, something we didn’t take care of in my country.”

Tomás Fernández (Cuba): “The goal is to qualify and then to raise the technical and tactical level to reach the top eight in the world, which looks like a too big goal, but I am counting on the core of the senior team, very young but with a lot of desire of working to rescue the rich history of our volleyball, especially of the Morenas del Caribe.”

Carlos Javier Cruz (Puerto Rico): “This is my international debut and I would like to achieve our goal of qualifying. I think my team is diverse, well covered in all positions and we will try to win the games in three sets because it is critical to achieve greater number of points.”

The Brazilian Mauro Marasciulo (Colombia): “I hope we can be the surprise team of the world championship and this tournament will help to know what to do and give continuity to our work. We have spectacular conditions at the High .Performance Centre in Bogota, since the Volleyball Federation is well supported by the Olympic Committee of Colombia.”

The Brazilian Wagner Pacheco (Dominican Republic): “We came to get advantage of all the games. This is an interesting preparation tournament, we are in a good group, all qualified to the world championship where we hope to qualify in the top eight and then battle for the medals”.

The Argentinean Estasnislao Vachino (Mexico): “I think we are doing well in the work towards the World Championship, but we need more international exposure and that is why we are here for. We have improved the height of the players, but the difference between the national level and the world is still big.”

Natalia Malaga (Peru): “Even though we are qualified to the U-18 and U-20 world championships, we will take this opportunity to strengthen our girls and give more international exposure to the youngest ones. It will be, without any doubt, of benefit for both competitions as we want to improve the sixth place in the world junior attained in 2011 at Lima.”

Do you know how many players WoV...