DEN M: EuroVolley 2013 under the spotlight in the heart of Copenhagen

Only 184 days are left for the start of the 2013 CEV VELUX Volleyball European Championship – Men to be co-hosted through this coming September 20-29 in Denmark and Poland. With this in mind a special action was held right in the heart of Denmark’s capital city where the European Championship was showcased as one of a few major sports events that will take place in Copenhagen this year. 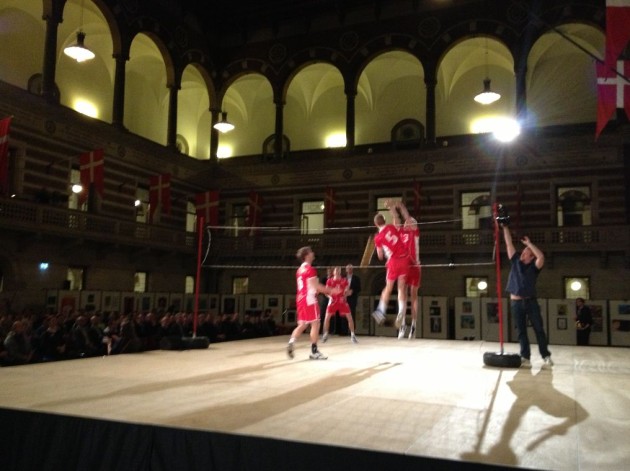 That action was organized by the City of Copenhagen and joined by the 2012 national champions in all sports for a show that was extensively covered by the national television as well as by other TV stations and numerous newspapers. In order to draw attention on the EuroVolley 2013, members of Denmark’s junior national team – who last year participated in the European Championship held in Randers – took the stage there in the City Hall where a small Volleyball court was set up and the players could show the uniqueness of their sport.

As the players displayed their skills, the Managing Director of the local Organizing Committee for the EuroVolley 2013, Mads Bang Aaen, introduced the audience on site as well as those following the show on TV to the major highlight that the Danish Volleyball Federation has been working on already since a couple of years. “It was a great opportunity to show Volleyball to many sports enthusiasts. We have been extensively promoting the Championship with a focus on the final four weekend taking place at Parken National Stadium which is located just nearby the City Hall” Mr. Bang Aaen says. “I believe that the spectators got an idea of what they shall expect as soon as the final round gets started this coming September” he adds.

The Mayor of Copenhagen, Frank Jensen, is also looking forward to that unique Volleyball show: “It is a great opportunity for all the citizens of Copenhagen to get to see Volleyball at its very best. Many of us are waiting with much excitement for the final four weekend at Parken. I do recommend everyone to join the fantastic Volleyball show that Parken will be hosting this coming September.“